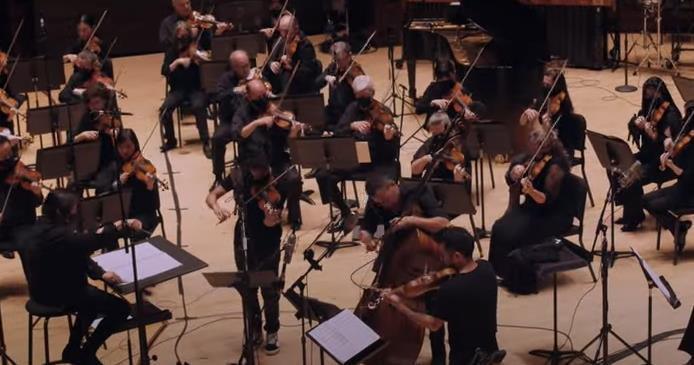 Mr. and Mrs. Sid R. Bass for the Fort Worth Symphony Orchestra, its Concertmaster, Michael Shih, and its Music Director, Miguel Harth-Bedoya.

Mr. and Mrs. Sid R. Bass for the Fort Worth Symphony

Miguel Harth-Bedoya’s performance of several works by Puts over the past few years led naturally to the idea of a residency during which the composer would write a piece for the Fort Worth Symphony. Specifically the work would showcase virtuoso concertmaster Michael Shih and the amazing 1710 Stradivari violin he plays—on generous loan by Mr. and Mrs. William S. Davis of Fort Worth. Puts began the present Violin Concerto in the summer of 2006, completing it in mid-December. The composer says that as a pianist, he particularly likes writing music for solo string instruments because it’s still something of a mystery—he revels in finding idiomatic solutions for sounds he wants by consulting string players.

Puts describes his Violin Concerto as a two-movement work, with a long first movement and a short second—“initially conceived as a piece with its own built-in encore.” Says the composer, “the first movement, Meditation, begins with a contemplative rising four-note motive in the strings and harp that grounds the entire piece, like a pendulum regularly swinging back and forth. Over this ever-present pulse the soloist plays a sweet, lyrical melody answered by the orchestral violins in two-voice counterpoint. The soloist answers in turn, and the alternation eventually leads to greater activity, all the while anchored by the regular pulsing. Slowly, steadily the movement builds to a virtuoso climax before ending quietly.”

In contrast to the inward-looking tranquility of the first movement, says Puts, “the second movement, Caprice, is a nonstop, fast, virtuoso showcase for the violin. The orchestral accompaniment is very light, simply providing color and unobtrusive support. The tour-de-force writing for the violin leaves the soloist no time to catch a breath and blazes to a furious conclusion.”