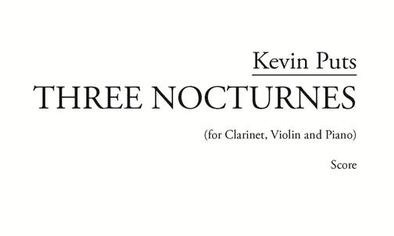 for violin, clarinet and piano

Three Nocturnes was commissioned by the Verdehr Trio and Michigan State University. The title refers to the various evocations of night in the work; only the third could be called a nocturne in the legitimate historical sense.

The first features a busy, arpeggiated violin part and a soaring, long-breathed melody in the clarinet, perhaps reminiscent of Rachmaninoff’s seemingly endless melodies. The violin assumes the melodic role in the second, at least until the clarinet joins in imitation. The last is a piano nocturne in the tradition of Chopin, complete with a widely-spaced accompaniment in the left hand. In answer to the constant motion of numbers one and two, the last nocturne is almost excessively slow and deliberate, finally achieving tonal stability in its final bars.