Symphony no. 4: from Mission San Juan 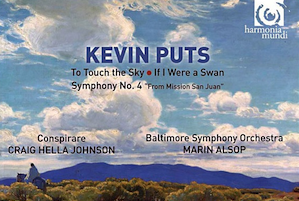 Symphony no. 4: from Mission San Juan

Every year in August, an entire orchestra of dedicated musicians gathers in Santa Cruz, California to play nothing but contemporary orchestral music for two weeks.  On the last day of this period, they travel south about thirty miles to the town of San Juan Bautista to play their final concerts at the old Spanish mission there.

For more than twenty-five years, Howard Hansen (no relation to the composer who spelled his name “Hanson) has not only avidly attended the Cabrillo Festival of Contemporary Music, he has been one of its most generous patrons.  For Mr. Hansen, the high point each year is the concert at San Juan Bautista, and he decided to commission a work as a gift to his wife Carrie.  He sent me some histories of the Mission and its town and asked me to write something inspired by this place which had become so special to him over the years.

That San Juan Bautista has been called “the Mission of Music” owes itself to the musical predispositions of some its founding friars who baptized thousands of Mutsune Indians and took it upon themselves to teach them to sing church music.  They were disturbed by the Mutsuns failure to abandon their own music in favor of that which the friars presumably considered to be more civilized.  Once I read this, I became immediately interested in tracking down any remnants of this Mutsun musical ancestry.  Victoria Levine, a specialist in Native American music who teaches at the University of Colorado Fort Collins, pointed me toward the Bancroft Library of UC Berkeley where a manuscript of Francisco Arroyo de la Cuesta which she believed contained transcriptions of around 200 Mutsun songs had been held since it had been sent there by the Smithsonian Institute several years ago. This manuscript, dating from around 1818, is falling apart, so I had it sent to me on microfilm only to discover to my disappointment many pages of Spanish and Latin text and only a few songs at the very end of the manuscript.

Quirina Luna Costillas is one of the few surviving descendants of the Mutsuns and a highly regarded leader among this small community.  She told me that I had found Francisco Arroyo’s arriquetpon, a dictionary he made himself which contains several hundred Mutsun words and a few song transcriptions as well.  Ms. Costillas said she had been searching all over the world for the volume of 200 songs Dr. Levine had described, but to no avail.  She also told me that the songs of her people should not be misused—healing songs are for healing, wedding songs are for weddings, etc.—and that if the few songs I had found in Arroyo’s journal were to find their way into my piece, it could cause a sickness for her people.  With this in mind, I decided I could treat this “source material” in much the same way I treated Björk’s album Vespertine in my third symphony.  I would try to imitate the flavor and nuance of it but avoid direct quotation.

Symphony no. 4 begins with music designed for performance within the reverberant walls of Mission San Juan Bautista, in other words music inspired by an acoustic environment with which I became acquainted when Marin Alsop performed my Symphony no. 2 with the Festival Orchestra at the Mission in 2003.  Rather “archaic”-sounding melodic lines recall the simplicity of early chant and feature an echo effect which is written into the orchestration.  The second movement (arriquetpon) is an imaginary compendium of Mutsun tunes loosely based on the shapes and motives I found in Arroyo’s diary.  From this festive and varied river of melodies, a prosaic, unchanging hymn tune repeatedly emerges and recedes.  A return to the opening music follows this movement in the form of an interlude and reaches a climactic upheaval of some magnitude.  It leads to a “healing song” which—in the midst of the current world climate— seems to me as appropriate as ever.