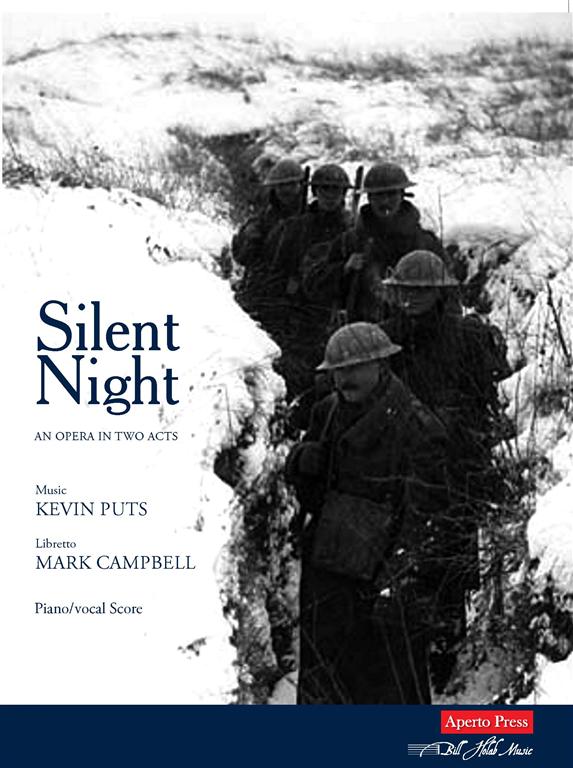 Sometime in 2008, I received an unexpected phone call from Dale Johnson, then Artistic Director of Minnesota Opera. He was interested in commissioning an operatic adaptation of Joyeux Noel, the 2005 Christian Carion film based on the spontaneous cease-fires and celebrations which took place along the Western Front on the first Christmas Eve of World War I. While I had produced a rather large catalog of orchestral works by 2008, there was very little vocal music—and no opera. Yet I was excited by the challenge of such a project, and my dearth of opera experience was smartly counterbalanced by the hiring of seasoned librettist Mark Campbell, with whom I have now written three operas.

We called the opera Silent Night. Since its premier in November 2011, there has been some interest in my making a separate piece out of the orchestral music in the opera. Benjamin Britten’s haunting Four Sea Interludes from Peter Grimes comes to mind as one of the most successful attempts at such an endeavor. I felt however that a single-movement “essay”—rather than a suite of separate movements—would work better for my purposes.

Silent Night Elegy more or less follows the narrative of the opera itself. An introduction featuring solo horn and solo cello introduces the primary thematic material of the opera. This is followed by a contrapuntal layering of the battle songs sung by the three armies (French, German and Scottish) in the opera’s Prolog, anchored by a military snare drum.

This leads directly to the cataclysmic battle scene which occurs near the beginning of Act I. A sense of confusion, sadness and disarray follow until a lonely solo flute, accompanied by the harp, emerges from the haze and introduces the music of the Act II burial scene. In this scene—which culminates in a bagpipe melody—the soldiers have agreed to extend the cease-fire to allow time to bury the bodies strewn about in No-man’s Land.

The generals of all three armies receive word of the unofficial celebrations. They are incensed and order the soldiers transferred to areas on the front where the fighting is most fierce.

In our first discussion about the opera, Mark Campbell mentioned a possible scene in which all three armies drift off to sleep on the evening after the great battle, singing in their three languages about home as snow gradually begins to fall. This became a chorus in Act I, and the Elegy closes with this prayerful music.

If there is a message borne by the film—or the libretto—it is that once your sworn enemy ceases to be faceless, war becomes far less possible. This is a message I fully believe in. I am deeply grateful to the San Francisco Symphony, the Indianapolis Symphony, and the St. Louis Symphony for commissioning this work, and to Bette and Joe Hirsch for their generous support and friendship.