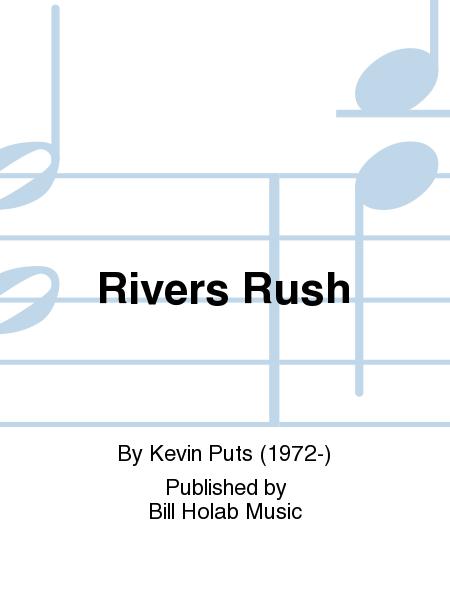 Saint Louis Symphony in celebration of the orchestra’s 125th anniversary

It seems fitting that in fulfilling a commission from St. Louis, a city that sits near the confluence of our nation’s two great rivers, Kevin Puts drew inspiration from the movement of water—its glinting color and texture, its surging energy—as it courses downstream. “I wanted to convey a sense of great, rushing energy,” the composer explained about River’s Rush, “combined with a monumental, epic quality throughout.” Most of the 10-minute piece proceeds at a fast pace. Mr. Puts observes that “there is a lot of activity at any given moment,” but he adds that “the intricacy of these moments contributes to a broader sense of phrasing.”

River’s Rush begins with bustling arpeggios, from which a simple two-note motif emerges from the orchestral bass and eventually blossoms into two-voice counterpoint. This idea moves through many of the instruments in the orchestra and culminates in a ruminative duet between two clarinets. Of course, this brief summary hardly conveys the wealth of musical activity the piece encompasses. “There is a lot of variety when it comes to texture and color in the work,” the composer notes. “Maybe I was thinking of the Mississippi (or any river for that matter), how its appearance can vary under different types of sunlight. Of course this variety is achieved through the use of different combinations of instruments, but it also has to do with the chords I use. I took a new approach to harmony in River’s Rush by combining major and minor chords from different keys freely, almost as a painter would combine paints on a canvas. Sometimes I create very complex sonorities using three very different triads, sometimes only one major or minor triad is being used. The result, I hope, is that all the music feels like it comes from the same source. There is variety but also economy.”