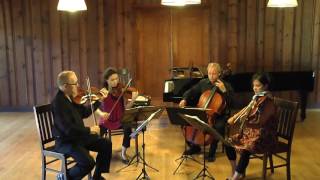 Robert Freeman in memory of his father

Quintet for piano and strings (affectionately titled The Red Snapper Quintet) was commissioned by Robert Freeman and members of his family in loving memory of his father, Henry Freeman (1909-97). In 1930, Henry Freeman became the first bassist to graduate from the Eastman School of Music. He was later invited by Serge Koussevitsky to join the Boston Symphony Orchestra where he served from 1945-67, and during the last two years of that period Mr. Freeman served as Principal Bassist.

The story behind the work’s creation may be of interest. Composed between October 2004 and April 2005, it was intended to serve as a companion piece to Franz Schubert’s “Trout” Quintet. In order to further develop this connection, Mr. Freeman commissioned poet Jack Brannon to compose a poem entitled Red Snapper, the first stanza of which I was asked to set to music. I would then use this music as the theme for a set of variations somewhere in the quintet, since the fourth movement of Schubert’s quintet is a theme with variations on Die Forelle (The Trout), a song composed by Schubert himself.

This variation set became the third movement of my piece, and the intervals and general qualities of its theme are foreshadowed by a series of slowly descending melodies in the first movement. The second movement is a short but very virtuosic scherzo played prestissimo, and some of the music here found its way into the seventh and final variation in the third movement. A very high, fragile series of bell-tones opens the first movement and sets the mood for the entire piece. This material returns as a moment of reflection near the end of the piece, and it came to me immediately after reading Jack Brannon’s poem for the first time.

It hangs above the pier’s rank bustle,
shimmering vermilion orb,
trophy stunning as a second sun,
gilt on the luster of day’s last light.

A prize-star fixed by unseen wire,
the fish outshines its sun-scorched anglers
proudly caught in gleeful portraits
lit by dazzle from their catch’s red glare.

No prisoner of the sky’s pale void,
this god springs like mighty Poseidon,
violet sovereign over blue-deep realms
it rules iridescent, vanishing free.