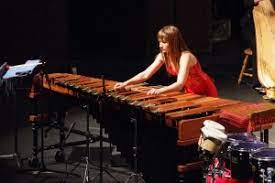 From a purely musical point of view, I have always focused more on melody and harmony than with rhythm. So I decided my contribution to the repertory of percussion concertos—a body of works which owes much to Evelyn Glennie’s tireless devotion to its creation, I might add—should be concerned with the elements I know. It is for this reason that I chose to write only for “pitched” percussion, that is mallet instruments. I also decided to avoid the soloist’s rapid and sometimes seemingly random movement from one instrument to the next, so when the soloist plays the vibraphone, for example, she stays put for quite awhile before moving on to another instrument. This is because I like to create for the listener a broad sense of both phrasing and form, a deliberate and logical journey through the various episodes of a piece, and the idea of the soloist moving frantically from instrument to instrument, while impressive to watch, felt counterproductive to this end. Like many of my pieces, Percussion Concerto consists of a seamless narrative from beginning to end, one unbroken movement.

The work begins with a clearly-stated, angular, but somewhat meditative idea in the vibraphone, and idea which I soon began calling the ‘ritornello’ once I realized it would return several times throughout the piece. With each return it signals the beginning of a new section or episode, and usually this means a change to a new percussion instrument as well. Its first appearance in the vibraphone is repeated immediately thereafter by the violins, while the soloist plays virtuosic flurries of notes and the brass play a series of rich supporting harmonies.

This leads to the first fast section of the piece, an upbeat allegro spiked with punchy chords and syncopations. The chords you will hear were tailor-made for the vibraphone and the hand positions that are best-suited for it. It’s an important series of chords because it returns exactly intact many times throughout the piece, almost like variations, and imbues the piece with what I hope is a memorable ‘color’. I like the idea that the flavor of the entire piece may be the mere result of my trying to write well for the vibraphone!

The allegro eventually gives way to another statement of the ritornello, this time played delicately in the highest register on the glockenspiel (orchestral bells), and here begins the next chapter in our journey. It made sense to move to the glockenspiel next because, like the vibraphone, it is made of metal bars arranged like a piano keyboard, and it represents an upper extension of the vibraphone’s range. The music is slow, searching and mysterious with serene lyricism in the strings accompanied by a meditative, clock-like pulse in the glockenspiel. You will hear the crotales—a set of metal disks which can be struck with a mallet or set ringing with a bow—and the chimes, or tubular bells, which contribute rather furiously to a great orchestral crescendo, a rising of drama and tension which is finally relieved by the ritornello, played this time con fuoco (with fire) by the chimes and the entire brass section.

The momentum subsides and a new episode begins, ushered in by a lush chorale in the strings which finally arrives on the harmony of b-minor. High above, the soloist begins a long-breathed, cantabile melody for marimba playing tremolando, or with rapidly repeating strokes to sustain the sound. The cello section eventually takes over this melody which rises up and fades away, leaving only the marimba, murmuring quietly alone in the depths of its beautiful low register and finally settling into the final ritornello, a moment of quiet transparency which I feel is the ‘heart’ or emotional center of the piece.

A return of the first allegro ensues and leads to a sort of mock cadenza for marimba which begins on a repeated note and becomes more and more dazzling and virtuosic, “picking up” the instruments of the orchestra and bringing them along for the ride as the music blazes toward its conclusion.