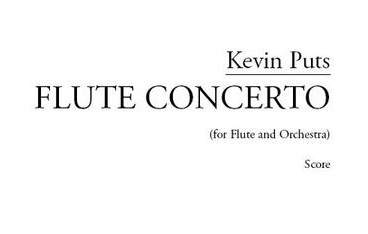 Bette and Joe Hirsch are longtime patrons of the annual Cabrillo Festival of Contemporary Music in Santa Cruz, California who became fans of my music when they heard my Symphony no. 2 performed at the festival in 2002. Incidentally, this was the first time Marin Alsop, the festival’s Music Director, had programmed a piece of mine and the beginning of a musical friendship I continue to cherish.

A few years ago, Bette secretly approached the festival about commissioning an orchestra piece from me for Joe’s 75th birthday. Not long after, Joe also secretly approached the festival about a chamber piece for the couple’s 35th wedding anniversary.  My thought was that a single piece might suffice (!), and why not a flute concerto, as I had never written one, and Bette played the flute in her youth?

What opens the concerto ­­is a melody I have had swimming around in my head for more than half a lifetime now, something I began singing to myself in college and for which I had never found appropriate context.  I was reminded of it while listening to a recording of Adam Walker, the brilliant Principal Flutist of the London Symphony Orchestra and the soloist whom Maestra Alsop had invited to premier the concerto. Built on a simple three-note motive, the theme is lyrical and easy to remember but somewhat rhythmically irregular at the same time.

The second movement was written during a period in which I was rather obsessed with the second movement of Mozart’s Piano Concerto K. 467, often referred to as the “Elvira Madigan concerto” due to its use in the eponymously titled film of the 70’s.  What Mozart could evoke with a major chord repeated in triplets, a simple bass-line played pizzicato, and a melody floating above is mind-boggling and humbling to me. Nonetheless, I decided to enter into this hallowed environment, and, in a sense, to speak from within it in my own voice.

Rhythm drives the third movement, its main ideas drawn from the main theme of the first movement and culminating in a highly energetic dialogue between the soloist and a small, contrapuntal band of winds, brass and percussion.