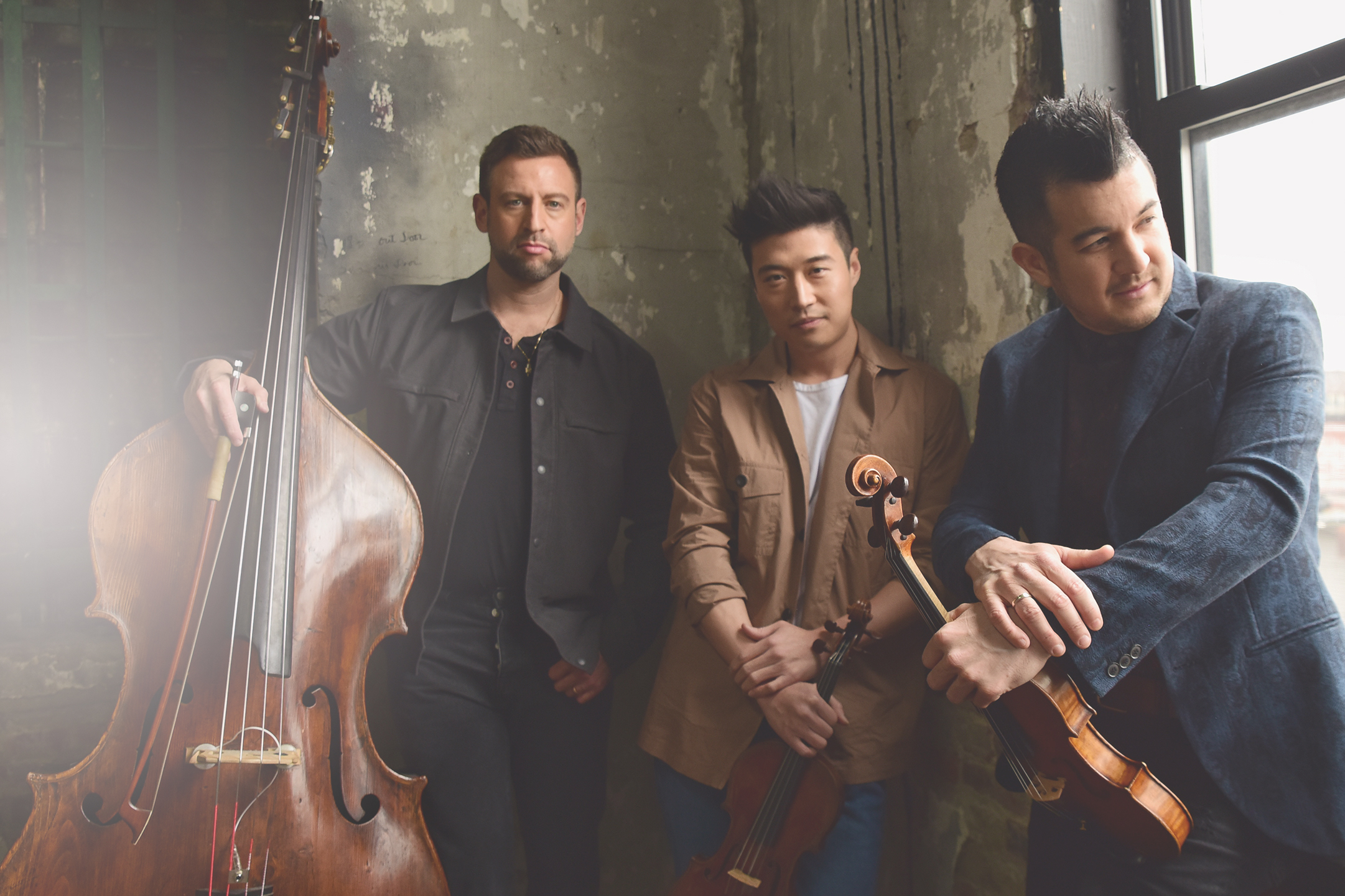 ‍
In April, 2017 I first heard a live performance by the prodigiously gifted string trio Time for Three at Joe’s Pub in New York City. The group—Nick Kendall and Charles Yang, violinists and Ranaan Meyer, bassist— had contacted me about the possibility of my writing them a concerto, and after hearing them play, sing, improvise and perform their own arrangements and compositions that evening I felt both elated—by the infectious energy and joy they exude as performers—and also rather daunted by the thought. It seemed our musical tastes were so similar that I suggested to them, not at all facetiously, “Maybe you ought to write your own concerto!” I simply couldn’t imagine conceiving any music they couldn’t improvise themselves.

One of the tunes the trio performed that night at Joe’s Pub was an original, called “Vertigo”, which the guys later told me they wrote in a hotel room on the road. In the song, all three members both play their instruments and sing. I wondered about the possibility of beginning the concerto with the trio singing a wordless refrain, acappella. I wrote a chord progression which unfolds from a single note and progresses through simple, suspended harmonies. Orchestral winds respond with the same music while the trio adds decorative, improvisatory gestures. This idea, first heard in a reflective manner, grows considerably until the orchestral brass deliver a most emphatic version of it. This first movement (“The Call”) ends with the same sense of questioning with which it began.

Threatening unisons, played by the entire orchestra, break the mood startlingly and impel the soloists who drive forward with syncopated rhythms and virtuoso flurries of arpeggios. The energy in this second movement (“Codes”) is unrelenting, often drawing its harmonic flavor from the ladder of notes which forms the overtone series and by combining triads from disparate keys.

By yet another contrast, the orchestral music that opens the third movement (“Contact”) is cold and stark. I had the image of an abandoned vessel floating inert in the recesses of space. The soloists interrupt this with a quiet, gently rolling meditation, eventually inviting a solo oboe and a solo clarinet to join in lyrical counterpoint high above. Eventually, the soloists recall the stark opening of the movement, rendering its rhythms into an unaccompanied phrase of tenderness and longing.

To put it mildly, the search for a silver lining amid the Covid-19 pandemic has been a unique challenge. But the cancellation of the initial performances of Contact scheduled for the summer of 2020 allowed us to continue working together on the concerto long after I finished it. Though my original title was simply Triple Concerto, we all agreed there was something more than abstract musical expression going on, that there was a story being told. Could the refrain at the opening of the concerto be a message sent into space, a call to intelligent life across the vast distances containing clues to our DNA, to our very nature as Earth people? Could the Morse code-like rhythms of the scherzo suggest radio transmissions, wave signals, etc.? And might the third movement (originally called simply “Ballad”) represent the moment of contact itself? (Admittedly, the climax of the film adaptation of Carl Sagan’s Contact, at which point Ellie, played by the wonderful Jodie Foster, en route via a wormhole to an alien civilization, witnesses a radiant cosmic event to which she tearfully breathes, “No words…they should have sent a poet…no words...” was in my mind during these discussions.)

Still in search of a finale to the concerto, I was serendipitously introduced to the wonderful gankino horo (Ganka’s Dance), a traditional Bulgarian melody, blazingly performed by at least twelve young cellists in unison at my (then) ten-year-old son Ben’s studio cello recital. At home, I began playing it on the piano and gradually my own compositional voice crept in. I was reminded of Bartok’s haunting Romanian Folk Dances and the composer’s fusion of his own musical sensibilities with age-old folk melodies. And so I set about composing a sort of fantasy on this tune, its asymmetric rhythmic qualities a fitting counterbalance to the previous three movements.

The word contact has gained new resonance during these years of isolation. It is my hope that this concerto might be heard as an expression of yearning for this fundamental human need. I am deeply grateful to Time for Three for their belief in my work and for the tireless collaborative spirit which allowed us to develop this showcase for their immense talents.