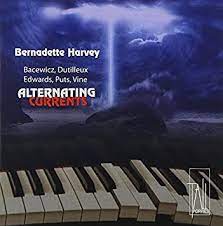 Alternating Current was commissioned by Young Concert Artists, Inc. for pianist Jeremy Denk and made possible through a generous grant from Ernest Levenstein. It was premiered on February 9, 1998 at the Kennedy Center, Washington D.C.

Writing piano music is a daunting task due to the enormous repertoire of great works pianists already have available to them. So in my preliminary improvisations for Alternating Current I allowed myself to gravitate toward the aspects of piano pieces I have studied since childhood: the motoric clarity of toccatas by Bach, the ennobling harmonic progressions of Beethoven’s slow movements, the terrifying neurosis of Ravel’s Scarbo.

The title refers to the use of alternating meter which occurs in all three movements, and also to the flowing nature, which characterizes the entire work. The first movement is quick and Baroque. Like the other two movements, this movement “alternates” in mode as well as meter, shifting between the key signatures of D and F.

The second movement is a slow dance in which contrasts descending triads with Beethovenian pedal points (repeated or held “central pitches” which provide a tonal reference point and focus the music’s energy). My aim was a sense of quiet nobility.

The last movement is bubbling and relentless, its dissonance achieved by placing the key of the first movement in one hand and the key of the second in the other. It contains a variety of things including darting scherzando chords, soaring melodic arches, percussive, toccata-like rhythms reminiscent of Prokofiev’s piano works. The notion of being in two keys at once eventually gives way to a return of the first movement’s harmonies, this time cast in a more rhythmic, “minimalist” guise. This leads to a very virtuosic ending which covers the enti